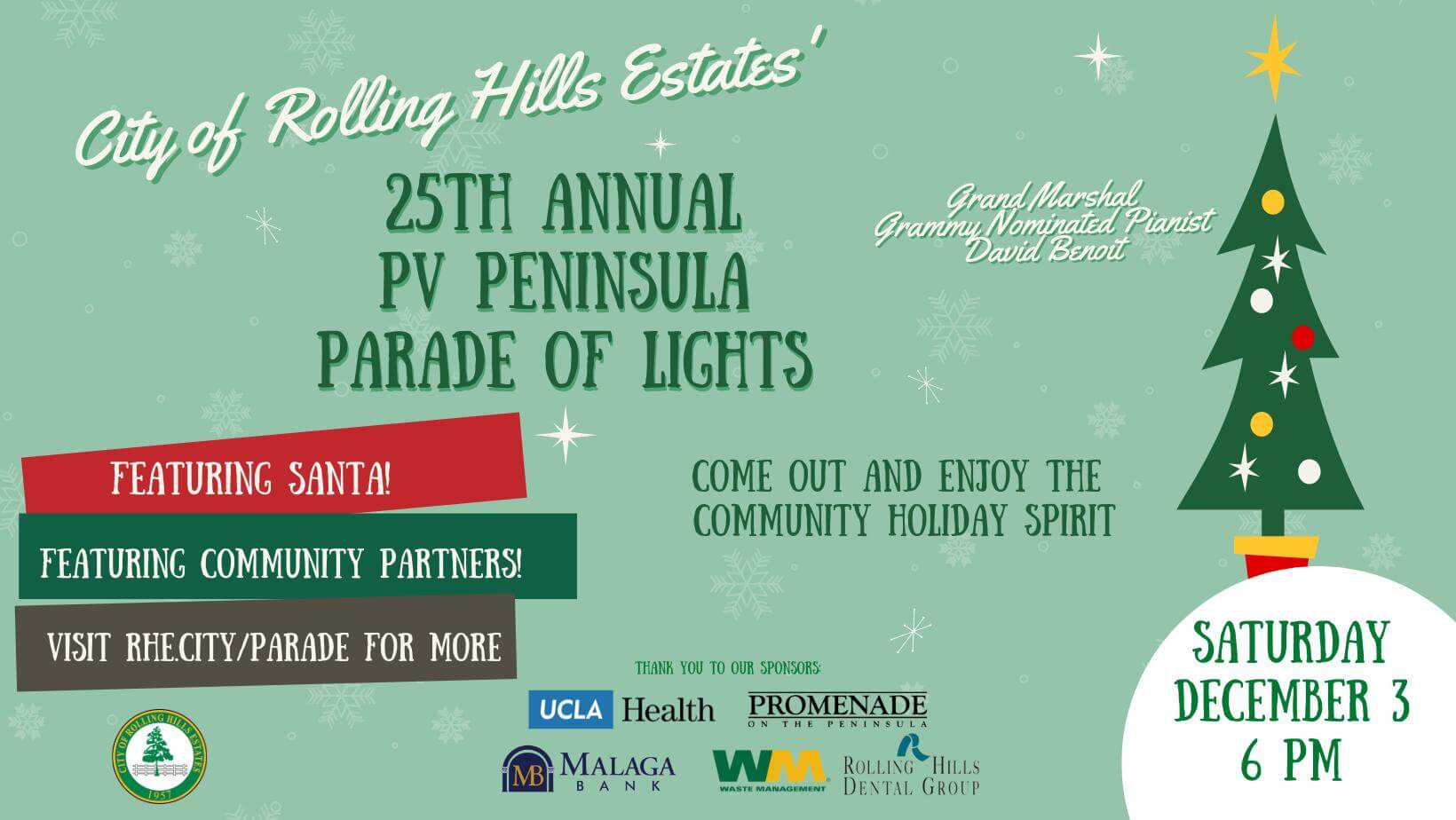 The City of Rolling Hills Estates is excited to once again light up the season with the Palos Verdes Peninsula Holiday Parade of Lights on Saturday, December 3, 2022.

This annual event will take place from 6:00 p.m. to 7:30 p.m., with festive floats and cheerful participants parading through the commercial district along Silver Spur Road and Deep Valley Drive, through the Promenade on the Peninsula to Norris Center Drive.

Serving as this year’s Grand Marshal is David Benoit. For four decades, the GRAMMY-nominated pianist/composer/ arranger David Benoit has reigned supreme as one the founding fathers of contemporary jazz. He has served as conductor with a wide range of symphonies including the Los Angeles Philharmonic, San Francisco Symphony and many more. Piano performances include a tribute to Charles M. Schultz, the Peanuts Piano Concerto and the music of Vince Guaraldi in conjunction with his recording of Here’s To You, Charlie Brown: 50 Great Years. David Benoit currently hosts a morning radio show on KKJZ 88.1 FM, CA, and continually tours & records, is composer in residence at Montalvo Arts, the Music Director & Conductor for the Asia America Symphony Association, and resides in Palos Verdes, California with his wife Kei and daughter June Koko.

Also featured are retiring Rolling Hills Estates Councilmember and past Mayor, Steve Zuckerman as Hometown Marshal. Councilmember Zuckerman has served on the Rolling Hills Estates City Council for 25 years, and as Mayor five times. And the Palos Verdes Peninsula Chamber of Commerce Citizen of the Year, Derek Gable, who is widely known as an internationally renowned inventor and former Mattel inventor. Derek was responsible for creating and managing many big hits including Masters of the Universe and items for Barbie, Hot Wheels, large promotional dolls, games, preschool etc.

To showcase the unique character of the Palos Verdes Peninsula, community and civic groups, school and youth organizations, marching bands, drill teams, equestrian units, local businesses, and others are encouraged to participate in the parade. And of course, it wouldn’t be the traditional event if we didn’t have Santa himself joining in on the fun.

Awards are given in various categories: Sweepstakes (Musical), Equestrian Sweepstakes, Best Commercial Float, and Mayor’s Trophy for the best local entry and the Susan Seaman’s Founders Award. Judging is provided by the Southern California School Band and Orchestra Association and a professional equestrian judge.

Free parking is available at the Town & Country Center, Promenade on the Peninsula, Peninsula Shopping Center and Peninsula High School.

For more information on the event and how you can participate or sponsor, visit www.RHE.city/parade