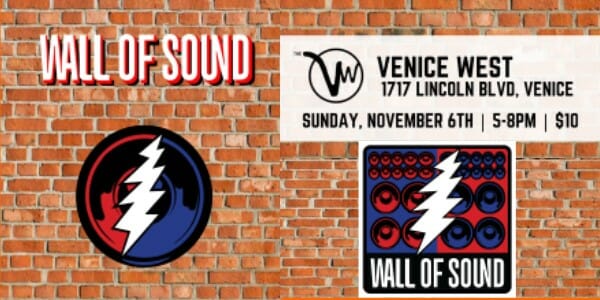 Wall of Sound is a classic take on Grateful Dead music focusing on the high energy, fast paced, 80’s period of the band. It is comprised of a super group of seasoned So Cal musicians in the jam scene – Nick Sandoval (Stu Allen’s Mars Hotel) Jim Shank (Rum Runners) Ed Lyon (WTFB, Cubensis) Darren Pujalet (Particle), Jeffrey Brown (Blue Man Group), and Jason Buck (Random Sequence). They came together to jam during the pandemic and soon after they were asked to play an afterparty for the Beachlife Festival. That gig went so well they were asked to play at the actual Beachlife Festival with many other national touring acts. Since then Wall of Sound has captured audience’s attention with long jams and authentic tones. They are excited to play to a growing family of Deadheads and looking forward to the road ahead.

Wall of Sound debut show at the famous Venice West. We are excited to play this awesome sounding venue and share the love of Grateful Dead music with you early on a Sunday afternoon. Starts at 5pm.