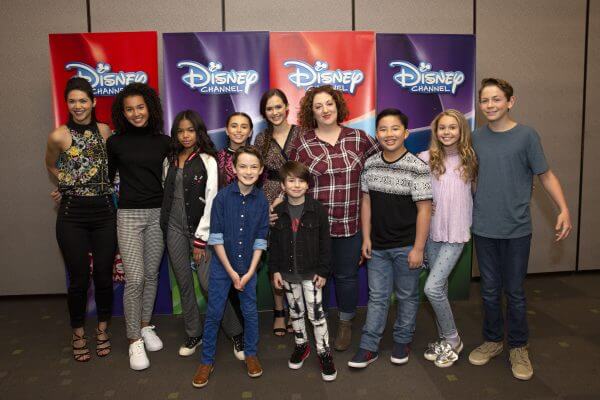 I am a Disney kid at heart.  I grew up in Los Angeles, so I’ve been going to Disneyland for as long as I can remember!  I have fond memories watching Disney movies as a kid and into my adult years!  It’s easy to see I am a huge fan of all things Disney and now my son is growing up with all things Disney as well!  Disney Parks, Disney Movies, Disney in Hawaii (which I never had when I was his age), Disney Jr, and now that he’s getting older, Disney Channel!  It’s important to me that my son is watching quality programming, that I know is “safe” and will help teach life messages, but is also entertaining.

We had a chance to check out the Disney Channel Fall line-up and we had so much fun!  The shows were entertaining, funny, well casted, and had great messages associated with them! And as a huge surprise, after our screenings, we go to meet so many members of the cast!!  It was an unforgettable day and one my son & I will remember every time we watch these shows!

Check out all the fun we had here on Instagram! And be sure to check out the Disney Channel Fall Line-up.  New episodes on Fridays, check your local listings.

Andi Mack
“Andi Mack” is a contemporary coming-of-age story about a relatable girl who’s trying to determine where she fits in and the many amazing ways she can live her life. On the eve of her 13th birthday, Andi learns that her older sister, Bex, is actually her mother. This revelation puts Andi on an unfamiliar path of self-discovery which she navigates with the help of her loving albeit complicated family; her two best friends, Cyrus and Buffy; and her middle school crush, Jonah Beck. Along the way, Andi learns that sometimes the unexpected is what makes life great.

Coop & Cami Ask the World
The live-action family comedy follows Cooper (Coop) and Cameron (Cami) Wrather, two middle school siblings who co-host Coop’s online show “Would You Wrather.” With the help of their little brother Ollie and Coop’s best friend Fred, the duo fields offbeat questions and results to the show’s millions of followers (aka Wratherheads) who help them solve problems – both mundane and madcap. Every day is an adventure in the Wrather’s hectic household, which also includes their older sister Charlotte and mom Jenna, as Coop and Cami tackle adolescence and everyday family situations with humor and heart.

Raven’s Home
In the second season, Raven Baxter and the entire family learn that her son Booker has inherited her ability to catch glimpses of the future. Like his wholehearted and watchful mom, Booker can only get a peek at what’s to come, but it’s just enough to drive each of them to interfere with the anticipated outcome. His ability to see brief visions of the future are nascent and uncontrollable and often seem to collide with Raven’s own visions, setting in motion madcap adventures for Booker and his twin sister Nia, their extended family, including Raven’s longtime best friend Chelsea and her son Levi, and Nia’s best friend and neighbor Tess.

‘LEGENDARY,’ AN INSPIRING ANTHEM ABOUT SELF-CONFIDENCE AND THE CELEBRATION OF OTHERS, PREMIERED MONDAY, OCT. 8, ON DISNEY CHANNEL

“Legendary,” an affirming anthem and music video that supports girls’ great potential everywhere and heralds the United Nations’ International Day of the Girl Child (Oct. 11), will debut MONDAY, OCT. 8, on Disney Channel and DisneyMusicVEVO. Made for Kids and Tweens age 6-14, “Legendary” encompasses the spirit of camaraderie and delivers the powerful message that when girls and young women support each other and work together, nothing is out of reach. This initiative further amplifies Disney Channel’s brand promises: “Express Yourself,” “Believe in Yourself” and “Celebrate Your Friends and Family.”