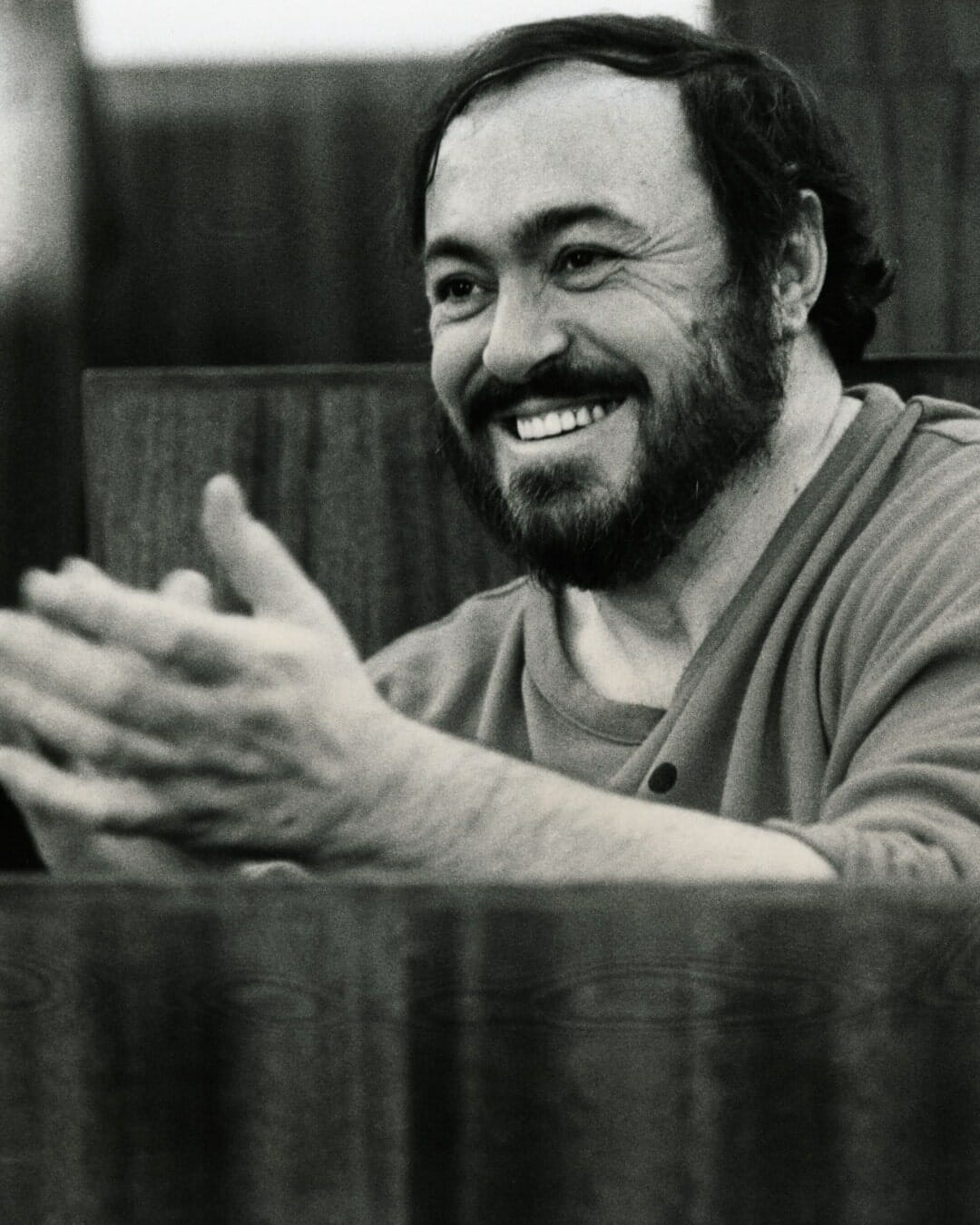 GET YOUR FREE TICKETS HERE https://www.eventbrite.com/e/pavarotti-the-star-free-screening-of-restored-verdis-requiem-tickets-402027664567

It is with great pride that Little Italy of Los Angeles announces that on August 24th our beloved Maestro Luciano Pavarotti will receive a posthumous star on the Hollywood Walk of Fame. It’s a moment of big pride for us Italians and on this occasion Little Italy of Los Angeles will host a special screenings of newly-restored Verdis’ Requiem at the historical Warner Grand Theater in San Pedro.

The event will be attended by some members of the Pavarotti family, the Italian Consul General Silvia Chiave, the Italian Cultural Institute in Los Angeles, the entire Little Italy of Los Angeles Board, the Department of LA Cultural Affairs, the Mayor of Pesaro, the Committee of Pesaro Italian Capital of Culture 2024 and the Rossini Opera Festival.

The screening will be introduced by world-renowned Maestro James Conlon, Music Director of LA Opera.

This event will contribute to strengthen the relationship that the San Pedro community has with Italy.

Doors will open at 5:00pm and the showcase will begin promptly at 5:30pm.

It would mean a lot to us if you could all attend and show your support.

Tickets are free but do require prior reservation.

Waiver Statement: The Warner Grand Theatre requires attendees must provide proof that they are fully vaccinated against COVID-19 or tested negative for the coronavirus within 48 hours of the event starting. Acceptable forms of vaccination proof include the person’s vaccine card — even a photo of it — or a QR code. Those who can’t get the vaccine yet, including children under the age of 12, are covered by the testing requirement. For questions or concerns, please email info@lilaa.org

By registering for the Pavarotti Screening, I acknowledge I will be required to show proof of vaccination or negative test before entering the venue.

The Star will be unveiled in Los Angeles on August 24, 2022There will be a new Star on Hollywood’s Walk of Fame: that of the great Italian tenor Luciano Pavarotti, who died in 2007 at the age of 71. As usual, the Star will be assigned by Hollywood’s Chamber of Commerce. The unveiling ceremony is scheduled for August 24, 2022 at 11:30 am (PDT) at 7065 Hollywood Boulevard, with live broadcasting on walkoffame.com. The tenor’s daughter, Cristina Pavarotti, will attend the ceremony and receive the prestigious award, also on behalf of the other heirs Lorenza, Giuliana and Alice Pavarotti, and Nicoletta Mantovani. She will give a speech together with orchestra conductor James Conlon, Musical Director of the Los Angeles Opera, who enjoyed a long professional and personal relationship with the artist. In addition to the ceremony there will be a series of celebrations presented as “Luciano Pavarotti, the Star” in the Californian metropolis on August 24 and 25, produced and organized by Cinzia Salvioli’s Italian film production house Albedo Production together with Paolo Rossi Pisu’s Genoma Films and Silvia Bizio, Anna Manunza and Cecilia Miniucchi, thanks to support by the Italian Ministry of Culture, the Emilia-Romagna Region, the cities of Modena and Pesaro, Marposs, Deisa Ebano, Calzanetto, Isatex, Alternative Group.

The Italian delegation will be welcomed to Los Angeles on August 23 with a reception held at the Italian Culture Institute (IIC) and under the auspices of the Consulate General of Italy in Los Angeles.

The heart of the celebrations will be the screening of two historical audiovisual Italian testimonies, never before seen in the United States, representing two important moments in Luciano Pavarotti’s long and intense artistic path. The first one is the 1970 performance of Giuseppe Verdi’s Messa da Requiem with the Rai Symphony Orchestra of Rome and the Rai Chorus of Milan and Rome conducted by Claudio Abbado at the Basilica di Santa Maria Sopra Minerva in Rome, preserved in the archives of Rai Teche and for the first time presented in a newly-restored version by Bologna’s Cineteca Foundation through the laboratory “L’immagine ritrovata”. Protagonists, together with the Italian tenor, are the voices of Renata Scotto, Marilyn Horne, and Nicolai Ghiaurov. The second screening is a selection of five musical pieces from the last of the three recital concerts held by Pavarotti at Teatro alla Scala in 1983: Alessandro Scarlatti’s Già il Sole dal Gange, Franz Schubert’s Ave Maria, Francesco Paolo Tosti’s La Serenata and Non t’amo più, and Giuseppe Verdi’s Quando le sere al placido from Luisa Miller. Pavarotti is accompanied by Leone Magiera on the piano. The “theme” accompanying the celebrations will be a new short-film by the Italian painter, illustrator, director, and artist Gianluigi Toccafondo – titled “Luciano Pavarotti, the Star” – a poetic homage to Pavarotti’s expressive power and the dedication the tenor had for young artists. The Los Angeles screenings are scheduled for August 24 at 8pm at the Aero Theater in Santa Monica (presented and curated by James Conlon – Richard Seaver Music Director of Los Angeles Opera, in collaboration with the American Cinematheque), on August 25 at 5pm at the Warner Grand Theatre in San Pedro (in collaboration with the Little Italy Association of Los Angeles Councilmember Joe Buscaino representing LA 15th Council District). On this occasion, the City of Los Angeles will present an official Proclamation honoring the tenor to the family. On the same day there will be a screening held at the Grammy Museum Auditorium in the Clive Davis Theater. To complete the California celebrations, in the morning of August 25, an exhibition space dedicated to Luciano Pavarotti will open at the Grammy Museum. Among the exhibited items is the score of Verdi’s Messa da Requiem used by the tenor for his debut in this sacred work at Teatro La Scala in 1967 under Herbert von Karajan, which bears the dedications and autographs of many of the great conductors with whom he interpreted the piece through the years. On August 24 in Italy, on the day of the unveiling of the Star on Hollywood’s Walk of Fame, Rai Cultura will dedicate Rai5 Prime time show to Luciano Pavarotti by broadcasting the restored version of his 1970 interpretation of Giuseppe Verdi’s Messa da Requiem. Throughout his incredible artistic career, which saw him walk the world’s stages for 43 years, Luciano Pavarotti, through his voice and his art, helped people discover and love opera by connecting it to a large and transversal audience. He received innumerable recognitions as well as national and international awards, most notably Knight of the Grand Cross of the Italian Republic. For his great dedication to humanitarian causes, the tenor has been granted – to name just a few – the International Red Cross Award for Service to Humanity, the Nansen Refugee Award and he was named “United Nations Messenger of Peace”. This Star once again underlines the international value of Italian opera, which has been nominated to enter, in 2023, in the list of the UNESCO-protected Intangible cultural heritage.

A further celebratory moment of events currently in planning will take place between November 12-16, 2022.