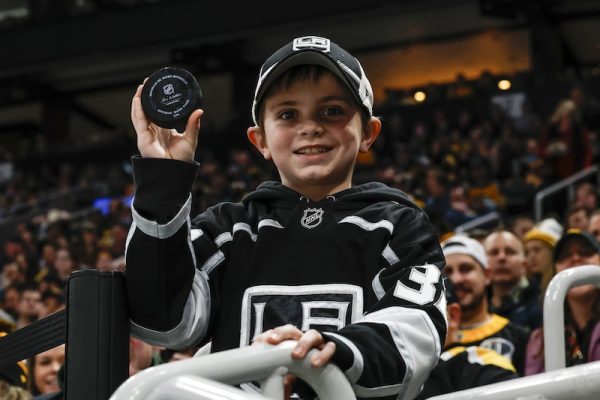 The LA Kings are back in action and they have a lot of exciting games and events planned! If you’re looking for something fun to do with your family, be sure to check out the Kings schedule. There are plenty of games that will appeal to both kids and adults. Get excited for some great family fun!

To help celebrate, Local Anchor has teamed up with the LA Kings for a Ticket Giveaway!  Enter to Win a LA Kings family pack’ inclusive of 4 tickets to holiday ice followed by 4 tickets to the game on November 27th!

Did you know that the LA Kings love to give back to the community through their  LA Kings Care Foundation? LA Kings Care provides support to children and families in need throughout Southern California. So not only are you getting great entertainment when you come to a Kings game, but you’re also helping out a worthy cause. What could be better?

The Kings Care Foundation is honored to take part in an NHL-wide initiative to celebrate Hockey Fights Cancer Month. Now in its 24th year, Hockey Fights Cancer has raised more than $32 million around the NHL, uniting the hockey community in support of cancer patients and their families since 1998. The Kings will hold their night on November 12 with donations supporting the American Cancer Society.

The LA Kings are also involved in many community outreach programs, including their sponsorship of local ice rinks. If you’re looking to get out on the ice and practice your hockey skills, be sure to check out one of the LA Kings rinks. You can find a list of all the rinks on the LA Kings website.  And The LA Kings Holiday Ice will return this November 2022 at LA Live!  It’s a great way to have some fun and support your favorite team!

The LA Kings Stem Club at Discovery Cube Los Angeles is a great way for kids to learn about science and technology.   If you’re looking for a fun and educational activity for your kids, be sure to check out the LA Kings Stem Club. You won’t be disappointed!

Whether you’re a diehard hockey fan or just looking for something fun to do with the family, be sure to check out the LA Kings schedule this season. You won’t be disappointed!

Here’s some LA Kings games and events you definitely want to add to your calendar!

We Are All Kings Night

On Giving Tuesday, join the LA Kings at their annual We Are All Kings Night as they take on the Seattle Kraken. In addition to enjoying a great game, you’ll also have the opportunity to see how the Kings have been supporting their local community and engage withKings Care Foundation and their partners!

The LA Kings will have the Freeway Faceoff presented by Destination Vancouver against the Anaheim Ducks.

The LA Kings will ring in 2023 with a New Year’s Eve Game against the Philadelphia Flyers. The first 15,000 fans in attendance will receive an LA Kings Crown!

Don’t miss out on Lakers Night! The LA Kings will be hosting the Boston Bruins, and ticket-holders will receive an exclusive LA Lakers x LA Kings co-branded retro shooting shirt.

Come to the LA Kings game against New Jersey Devils, and be one of the first 5,000 attendees to get a Los Angeles Dodgers co-branded sunglasses! If you buy tickets in advance, you will also receive an exclusive L.A. Dodgers x LA Kings co-branded shirt!

On Filipino Heritage Night, the LA Kings will be facing off against the Dallas Stars. Get a ticket package deal to receive an exclusive co-branded hat from the event!

On Dustin Brown’s retirement night, the LA Kings will be honoring him with a statue unveiling and number retirement against the Pittsburgh Penguins.

The LA Kings will celebrate Black History Month with a game against the Buffalo Sabres.

Come to the LA Kings game against the Montreal Canadiens and purchase a ticket pack to receive an exclusive co-branded jersey from LA Galaxy x LA Kings!

The LA Kings will celebrate Gender Equality Night against the St. Louis Blues.

Come celebrate St. Patrick’s Day and Irish Heritage Night with the LA Kings as they take on the Columbus Blue Jackets! Purchase a ticket pack to get an exclusive Irish Heritage x LA Kings co-branded hat!

Come to the LA Kings game against the Vancouver Canucks and show your support for Pride Night! All fans in attendance will receive an exclusive LA Kings rainbow tube socks.

The LA Kings are teaming up with the Rams for an event against the Winnipeg Jets, where fans have the opportunity to purchase a ticket pack that comes with a branded fanny pack or backpack!

To close out the regular season, the LA Kings will be hosting Fan Appreciation Night, presented by Bally Sports West against Vancouver. In attendance, every fan will go home with an LA Kings Slap Koozie!

The LA Kings have a busy season ahead, with many family friendly games and events. Be sure to buy tickets early to avoid disappointment! These games are a great opportunity for fans of all ages to come out and enjoy some hockey action. We hope you’ll join us at the arena soon!