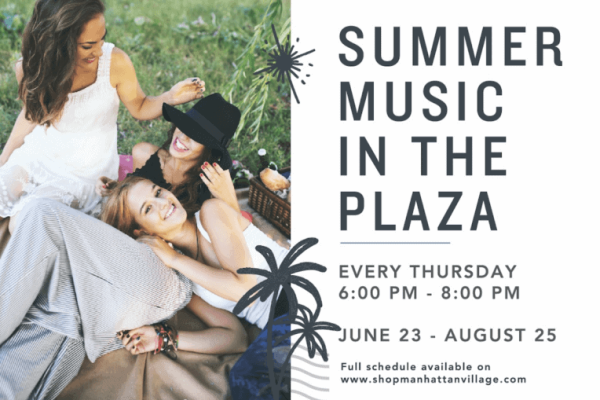 Manhattan Village Summer Concerts in The Plaza Are Back

Summer Concerts in The Plaza

Summer Concerts in Manhattan Village are back. Join us in The Plaza every Thursday night from 6-8pm from June 23 to August 25 for a fun night out. Grab a bite to eat before the concert or dine al fresco with your favorite MV restaurants in The Plaza. Beach blankets and chairs are encouraged.

There will be no outside food or beverages allowed. Thank you for your patronage of Manhattan Village eateries.

We ask that you see the Concierge crew at the event for complimentary hand sanitizers or wipes if needed, for the health and safety of the community.

Matt Commerce is a singer/songwriter from Virginia whose style incorporates catchy tunes, acoustic guitar, and a beautiful soulful voice.

Commerce began playing the cello and stand-up bass as a child before picking up the guitar at the age of twenty and becoming a full-time performer within two years. Matt relocated to California and began performing at venues all across the West Coast. He joined a band and released “Closer Than You Realize,” a first album with “addictive songs you find yourself humming long after you’ve listened…”

“One of the most delightful audio discoveries in quite some time…” (North County Times). (From the San Diego Troubadour) The San Diego City Beat added “It would be hard to find another artist who exudes as much uplift in such a believable way.”

Adam Lasher is an artist who appeared on FOX’s American Idol in the 2015 season and was a finalist in the 2016 season. Adam originally auditioned in New Orleans, with an original song called “These Shoes,” and instantly became a favorite of the judges. When they inquired about a small black bag fastened to his guitar strap, Adam revealed that he is a type 1 diabetes to a national audience.

Jennifer Lopez initially mistook Adam for Jimmy Fallon in disguise due to the striking likeness. This resulted in Jimmy Fallon performing a Ryan Seacrest impression on The Tonight Show. Adam is also dedicated to improving the lives of other Type 1 Diabetics by raising awareness of new diabetes medical advances.

Jackie Foster is a versatile songwriter and vocalist who fills the room with her warm, rich tone and powerful voice, leaving you wanting more. Jackie was born and reared in Poway, California, and received a full scholarship to Berklee College of Music. Jackie drew the eye of the producers of NBC’s The Voice when she was there. Jackie is recognized for her soaring belts and vocal prowess, not to mention her dominance of the stage, after a record-setting run on The Voice, reaching the Semi-Finals in Season 14. This was confirmed in August 2019, when she made her live debut at Chicago’s Lollapalooza Music Festival. Jackie relocated to Los Angeles as a result of her achievement.

Her goal has always been to tell her tales and connect with admirers all across the world. Jackie’s style is peppy and simple to groove to, which, when combined with her unflinchingly honest lyrics, explains why she is so popular.

The Junior single “Clearer” by Jackie Foster was released in March of 2021. Jackie is ready to fill a stadium with shouting crowds, all chanting her songs and creating a lovely atmosphere where everyone can feel adored and connected via music, with the future at her fingertips.

Singer-song writer Matt Commerce returns on July 21 for a second set of his acoustic riffs and soulful vocals. You won’t want to miss it after hearing him the first time, considering that his voice was voted by NBC San Diego as one of the city’s “Top 10 Voices.”

Join Juli Hernandez and Malia Ward, contestants on ABC’s The Ultimate Surfer and professional surfers, as they surf the streets of Los Angeles motivating the next generation of strong female athletes.