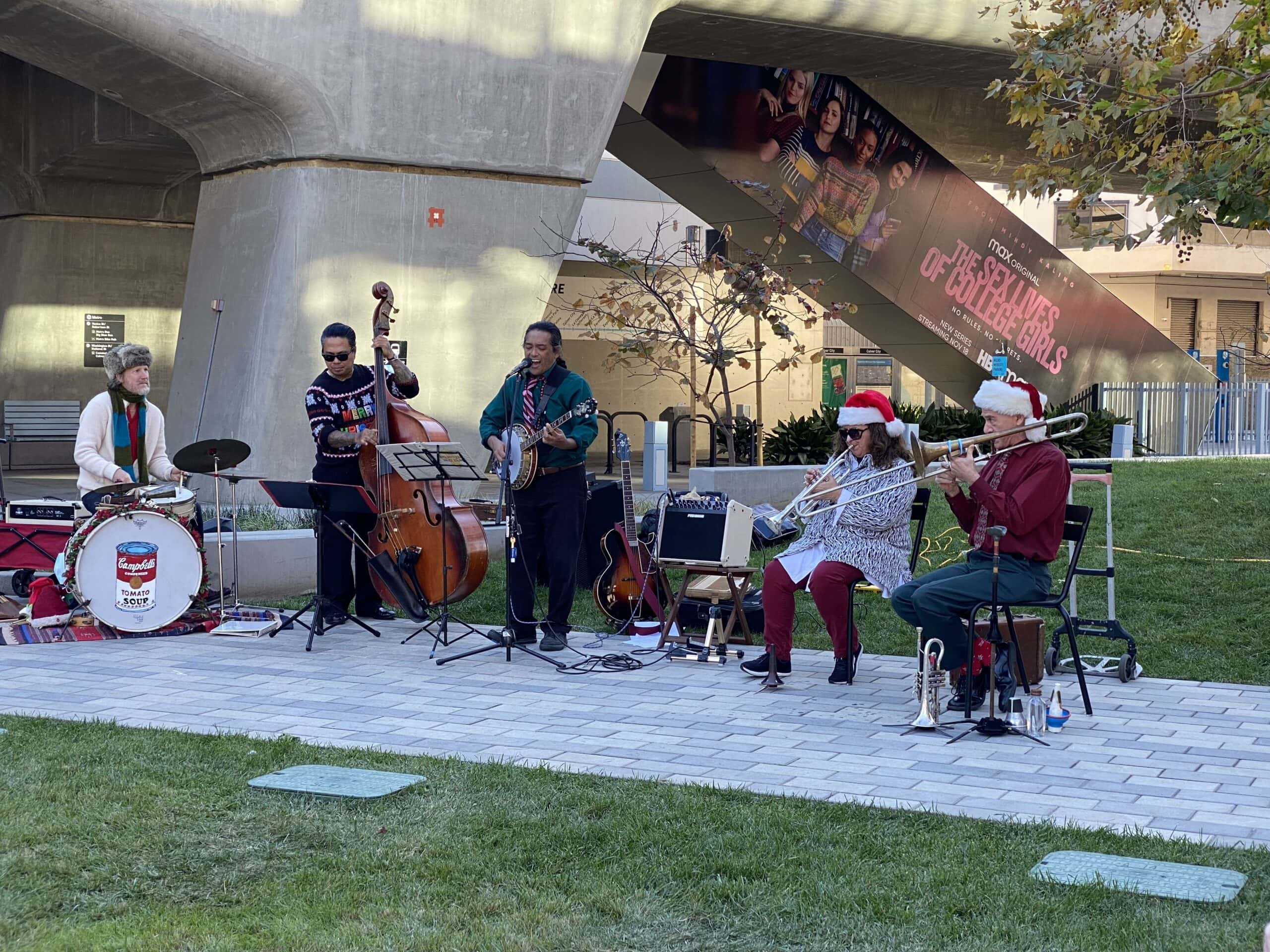 Holiday Jazz on the Lawn and Swing Dancing at Ivy Station

Enjoy some swingin’ New Orleans traditional jazz and holiday tunes courtesy of the Big Butter Jazz Band. Picnic on the lawn or swing dance on the plaza! Champion swing dancers Chandrae Gomez and Stephen Sayer of LA Jitterbug will be dancing and teaching swing dance basics between sets. All ages welcome.

This programming was created in part through the City of Los Angeles Arts Development Fee Program, Department of Cultural Affairs.

The Big Butter Jazz Band is dedicated to playing New Orleans Traditional (aka Trad) jazz and Swing jazz. Standards and songs from the 1900’s-1930’s and Tin Pan Alley, back from the times when jazz was still dance music. Whether you call it—Trad, early jazz, hot jazz, Dixieland, New Orleans jazz, or vintage jazz—it’s full of beautiful melodies, infectious energy, and a pulsing rhythm that you can’t help but dance to. The band was founded in 2013 and has been playing restaurants, bars, festivals, special events, jazz festivals and swing dances all around Southern California ever since.

Drawing inspiration from the musicians of the past as well as the young New Orleans bands on Frenchmen Street, they’ll get your feet shuffling, head bobbing, fingers snapping, and body moving with their hard-driving rhythm section and hot ensemble choruses. Big Butter is delighting LA’s swing dance crowd and many others with their hot speakeasy sounds.

Steve is a dancer/instructor who is dedicated to preserving the great American partner jazz dances of the 1920′s-1950′s. Originally from Dayton, Ohio Steve began dancing in 1998 at the age of 16. Falling in love with lindy hop and other dances of the swing era, he traveled to the East and West coasts to dance, study and learn the different styles of swing dancing.

In 2005 he moved to Los Angeles and soon began teaching weekly at Joe’s Bar and Grill in Burbank. In 2009 he began competing, winning many Los Angeles contests such as the Bayside Lindy Battle and the Paladino’s Jitterbug contest. In 2010, 2011 and 2012 he won 1st place in the Collegiate Shag division at the National Jitterbug Championships with partner Fancy Dougherty. Also in 2011 he won 1st place with partner Chandrae Roettig Gomez at the National Jitterbug Championships and the US Open Strictly Lindy Hop divisions. In 2012 he and Chanzie won the Camp Jitterbug Strictly Lindy, US Open Strictly Lindy and came in 2nd at the International Lindy Hop Championships. In 2012 Stephen was inducted into the California Swing Dance Hall of Fame.

Today Steve teaches weekly at Madilyn Clark Studios in North Hollywood and has started the California Jubilee performance teams. He is committed to improving and pushing the limits of his own dancing as well as those who take his classes. His focus of connection to partner and music are what makes his dancing and teaching so unique.

Chandrae’s beginnings warranted her an early career as a gymnast, after which she was introduced to contemporary dance at Dance Vision, in Portland, Oregon. Garnering a scholarship to Edge Performing Arts Center in Hollywood, Chandrae graduated from their professional program. Specializing and excelling in Jazz, Hip Hop, Modern, Contemporary and Theater Dance Styles, her early training afforded her the scope to bring her athleticism to Swing Dance. Her success as a graduate from Edge Performing Arts Center has allowed Ms. Gomez to work with some of LA’s top choreographers in film, television, music and stage. Often serving in the dual roles of dancer/performer and co-choreographer.

Her true love and passion for preserving the history of classic Swing Dancing and its various styles has garnered her a position of respect as a celebrated teacher in the Swing world for the past 7 years. Astute in the various styles of swing, Chandrae has focused on teaching the skill of partnering for the past 10. Her cheerful and playful attitude proves her a joy to watch.

Chandrae performed in the major motion picture entitled “Gangster Squad” alongside her dance partner Stephen Sayer. Together, they have taught at Swing/Jazz Camps and won national titles in Swing Dance competitions with Festivals in the U.S. and throughout the world. She and Steven have created 3 performance groups and are committed to seeing vintage Swing Dance and Collegiate Shag back on the main stage, in a big way.

Ivy Station is a new mixed-use development and public space connected to the Shay Hotel, the Upper Ivy Residences, and headquarters of Warner Bros. Discovery in Culver City. In addition to visiting a curated and expanding mix of shops and restaurants, attendees can enjoy the public lawn and gardens and participate in dozens of free public events from fitness classes to kids programming to live music and other activities on a weekly basis. 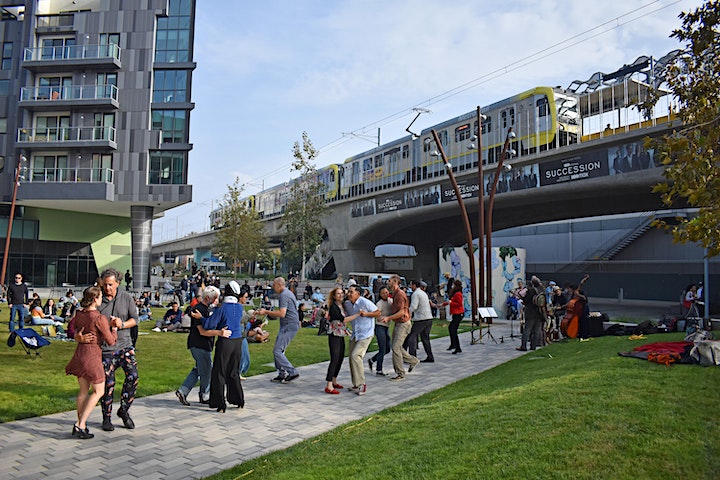 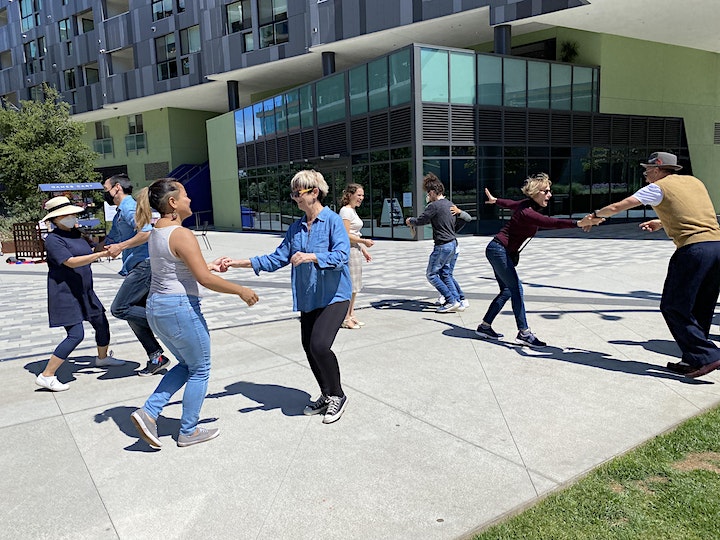 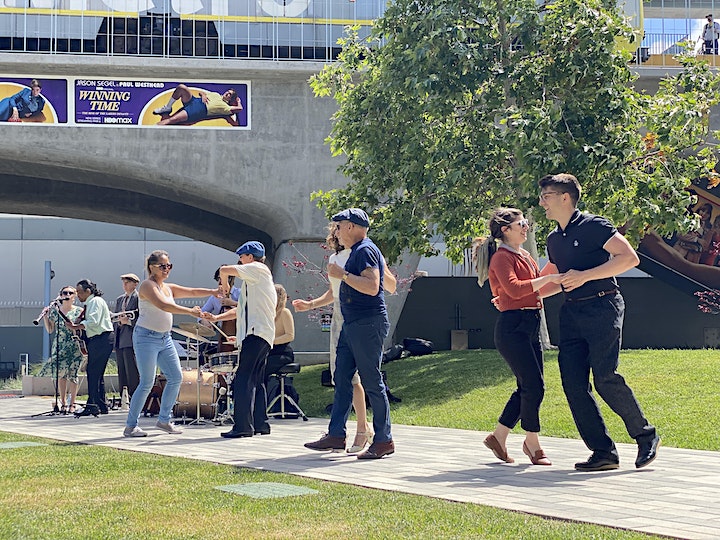